Research and Development to Increase Production of Pulses

Research and Development to Increase Production of Pulses


Indian Council of Agricultural Research (ICAR) is makingefforts and has taken a number of Research and Development (R&D) initiative towards pulses in the country. As a result, there has been about one-and-half-times improvement in the yield of pulses during the last 60 years from 500 kg/ha in 1954-55 to 728 kg/ha in 2014-15.

The systematic and concerted efforts of ICAR has led to the development of 59 high yielding climate-resilient varieties of pulses for different agro ecological situations during the last five years (2011-2015). Early maturing and thermo-tolerant varieties for newer niches and cropping systems have also been developed. To ensure availability of quality seed to the farmers, 69391 q breeder seeds of pulses were produced and supplied to different seed producing agencies for further multiplication during the last five years (2010-11 to 2014-15).

In order to boost the production of pulses in the country, the ICAR and DAC&FW under the Ministry of Agriculture, Government of India, have jointly prepared roadmap and action-plan with two-pronged approach of productivity enhancement and increasing production through area expansion under various ongoing Central schemes. The strategy includes increasing productivity of pulses by reducing the yield gap at the farmers’ fields through a mission mode programme for promoting improved technology of pulses, improving seed replacement rate (SRR), provision for life saving irrigation, ensuring availability of critical inputs with corresponding policy support in the form of attractive MSP, procurement, credit, insurance, subsidies, etc. to protect the interest of pulse growers.
at April 30, 2016 1 comment:

The Department has been focusing on creating awareness and educating the farmers about organic farming practices in the areas where clusters are formed, under PKVY. The scheme guidelines provide a sum of Rs.80,000 per cluster to undertake mobilization of farmers through exposure visits and training. The National Centre of Organic Farming (NCOF), Ghaziabad, a unit under the department undertakes various extension and publicity activities like exhibitions, radio talks, TV programmes, distribution of literature on organic inputs/ organic farming etc to educate the farmers. NCOF is also publishing biannually Bio-Fertilizer Newsletter as well as quarterly Organic Farming Newsletter. In addition, various books on production and use of bio-fertilizers have been published in various languages for distribution to the farming community. Radio jingles on organic agriculture are broadcasted on 4 different FM Radio Stations including Delhi, Bangalore, Nagpur and Lucknow.

NCOF has also been organizing farmers’ training and field demonstration programmes (FTFD) on organic farming since 2015-16 in various villages adopted by the Hon’ble Members of Parliament under “Sansad Aadarsh Gram Yojana” (SAGY), through its Regional Centres of Organic Farming (RCOFs). It has completed 300 no. of FTFD in 2015-16 and has scheduled 297 no. in the year 2016-17.

Cost of organic agriculture largely depends on on-farm generation of inputs. When on-farm organic inputs are used, cost of production per unit area is less than by 13% under organic agriculture than inorganic management. However, if organic inputs from outside the farm are purchased and utilized, the cost of production increases by about 15-20% depending on the nature of inputs used. Integrated Organic Farming System (IOFS) models being developed under NPOF promises to meet 70-80% of organic inputs within the farm thus reducing the market input cost considerably.

Government is providing assistance for establishment of large mechanised compost plants by State Governments/ other public sector/private industries/private entrepreneurs for fruit and vegetable waste/ agro waste compost unit. Also, assistance is provided to farmers for on-farm production of organic inputs.  The details of assistance are given below. The State-wise organic manure produced and available in the country is given below.

i)    Setting up of State of art liquid/ carrier based Biofertilizer/ Biopesticide units, 100% Assistance to State Govt/Govt. Agencies upto a maximum limit of Rs.160.00 lakh /unit and 25% of cost limited to Rs.40 lakh/unit for individuals/ private agencies through NABARD as capital investment of 200  Total Per Annum(TPA) production capacity.

v)   Paramparagat Krishi Vikas Yojana (PKVY): The scheme is implemented by the State Governments on a cluster basis of 20 hectare each. The farmer within the cluster is given following financial assistance for Integrated Manure Management.

The detail guidelines are uploaded in web site www.agricoop.gov.in.

B.     Mission for Integrated Development of Horticulture (MIDH)

1. Adoption of Organic Farming. -50% of cost limited to Rs. 10000/ha for a maximum area of 4 ha. per beneficiary, spread over a period of 3 years involving assistance of Rs.4000/- in first year and Rs.3000/- each in second & third year. The programme to be linked with certification.

D.  National Food Security Mission (NFSM): Under NFSM, financial assistance is provided for promotion of Bio-Fertilizer (Rhizobium/PSB) @50% of the cost limited to Rs.300 per ha.

Email ThisBlogThis!Share to TwitterShare to FacebookShare to Pinterest
Labels: Environment

only two states give more than half of income tax

Modi invited to address US Congress on June 8

india's economy is expected to grow by 7.6 per cent in 2016-17, largely on the back of urban household spending amid steady employment growth and low inflation, according to the United Nations Economic and Social Commission for Asia and the Pacific (UNESCAP).Growth is expected to edge upwards to 7.8 per cent in 2017-18. But a good monsoon could provide a fillip to growth, pushing gross domestic product (GDP) growth to 7.8 per cent in FY17 itself, said Nagesh Kumar, who headsESCAP South and South West Asia.Downside risks to growth remain. Principal among them are a slowdown in China and exchange rate volatility due to a possible interest rates hikes by the US Federal Reserve, says Kumar. The US Fed, which has kept its benchmark interest rates between 0.25 per cent and 0.5 per cent since December last year, is expected to increase rates later this year as the economy strengthens and the job market firms up. 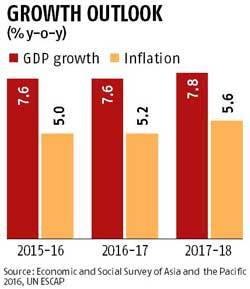 With rural demand continuing to be weak after two years of back-to-back droughts, urban demand is expected to do the heavy lifting. Urban consumption is expected to get a boost with the government accepting the Seventh Pay Commissionrecommendations.Exports, however, continue to be a major cause of concern. With global demand continuing to remain anaemic, exports are unlikely to provide the much needed stimulus to growth. India's exports contracted for 16 consecutive months in March. A big reason is the slowdown in China. According to UNESCAP, exports from all major Asian economies have collapsed."The overall strength of domestic demand will depend on progress made in implementing structural reforms and how rapidly large scale stalled infrastructure projects are unlocked" said UNESCAP."Some progress has been made in reforming fiscal policy such as rationalisation of fuel price subsidies, but the implementation of the goods and services tax remains an important reform that is being held up due to political deadlock" it added.Speaking at the launch of UNESCAP's Economic and Social Survey of Asia and The Pacific 2016, Rathin Roy, director at the National Institute of Public Finance Policy said, while macroeconomic indicators suggest India is in a sweet spot, there are huge concerns on the project execution side and supply-side constraints continue to pose a challenge.On the issue of monetary policy, while many are arguing for a 25-basis point cut, Roy says at the margin a cut of that size is unlikely to change the situation fundamentally. What is more important is to look at quantity restrictions on credit. The case for greater interest rate cuts largely rests on a benign inflation environment.With the India Meteorological Department projecting that monsoon is likely to be "above normal" this year, expectations are it will push agricultural growth, easing supply side constraints. ButUNESCAP projects inflation to average 5.2 per cent in 2016-17, edging up to 5.6 per cent in 2016-17, leaving little room for the Reserve Bank of India to cut policy rates.
at April 29, 2016 2 comments:

The Prime Minister of India, Shri Narendra Modi, heartily thanked and congratulated all the ISRO scientists and team ISRO for completing IRNSS constellation and dedicated IRNSS to the nation as ‘NavIC’ (Navigation Indian Constellation). He appreciated India’s space community for making the country proud through such achievements which have helped in improving the life of common man.

After PSLV-C33 lift-off at 1250 hrs (12:50 pm) IST from the First Launch Pad with the ignition of the first stage, the subsequent important flight events, namely, strap-on ignitions and separations, first stage separation, second stage ignition, heat-shield separation, second stage separation, third stage ignition and separation, fourth stage ignition and satellite injection, took place as planned. After a flight of 19 minutes 42 seconds, IRNSS-1G was injected into an elliptical orbit of 283 km X 20,718 km inclined at an angle of 17.867 degree to the equator (very close to the intended orbit) following which the satellite successfully separated from the PSLV fourth stage.

After separation, the solar panels of IRNSS-1G were deployed automatically. ISRO's Master Control Facility (MCF) at Hassan, Karnataka took over the control of the satellite. In the coming days, four orbit manoeuvres will be conducted from MCF to position the satellite in the Geostationary Orbit at 129.5 deg East longitude.

IRNSS-1G is the seventh of the seven satellites constituting the space segment of the Indian Regional Navigation Satellite System. IRNSS-1A, 1B, 1C, ID, IE and 1F, the first six satellites of the constellation, were successfully launched by PSLV on July 02, 2013, April 04, 2014, October 16, 2014, March 28, 2015, January 20, 2016 and March 10, 2016 respectively. All the six satellites are functioning satisfactorily from their designated orbital positions.

A number of ground facilities responsible for satellite ranging and monitoring, generation and transmission of navigation parameters, etc., have been established in eighteen locations across the country. Today’s successful launch of IRNSS-1G, the seventh and final member of IRNSS constellation, signifies the completion of the IRNSS constellation.
at April 28, 2016 2 comments:

Heritage Status to Indian Sites by UNESCO
The Archaeological Survey of India (ASI) is the nodal agency for forwarding any request for World Heritage status to any Indian site whether cultural or natural. Based on the proposals received from the Central or State Government agencies as well as management Trusts, etc., and after their due scrutiny, the Government forwards the nomination dossiers to the World Heritage Center. The list of places in India which have been granted World Heritage status by UNESCO is given below in Table-1.

There are 10 enlisted criteria (given below) for determining Outstanding Universal Value (OUV) for World Heritage nomination. The proposed nomination must satisfy at least one of these 10 criteria.

UNDER PROTECTION OF ARCHAEOLOGICAL SURVEY OF INDIA

Under Protection of Ministry of Railways

Under Protection of Rajasthan State Archaeology and Museums Department

Under Protection of Ministry of Environment & Forest