Here are six charts to understand the QS Asian University Rankings and how Indian institutions have performed on different parameters
India has 17 institutions among the top 200 universities in Asia, led by the Indian Institute of Science or IISc in Bangalore (33rd rank), followed by IIT Bombay (35), IIT Delhi (36), IIT Madras (43), IIT Kanpur (48) and IIT Kharagpur (51), according to the QS Asian University Rankings. The rankings are limited in their impact and cannot be compared with the world university rankings, but they do give an indication of the competitiveness of these institutions in the region. Though IISc and IITs lead the pack of India in the Asian rankings published earlier this week by British ranking agency QS, they still lag behind their Singapore and Chinese counterparts.
However, there are several parameters within the rankings on which the Indian institutions have done exceedingly well, better than several top institutions in Asia. These parameters include the qualification of teachers and papers published per teacher. There are also parameters where the top performers of India like the IITs have fallen short not just before their Asian peers but also in front of less reputed private universities in India.
Here are six charts that go beyond the overall ranking to understand the QS Asian University Rankings and how Indian institutions have performed on different parameters.
1) Academic reputation
Though IISc is the best Indian institution as per the Asia rankings by QS, when it comes to academic reputation, IIT Bombay and IIT Delhi have done better than IISc. Jawaharlal Nehru University in Delhi otherwise placed much lower in the overall rankings has done better than many, including the IITs. Click here for enlarge
2) Employer reputation
IISc Bangalore may be the table-topper in India in overall rankings, but there are several others, including the less reputed Mumbai University or even less talked about Anna University in Tamil Nadu, which have done much better. Employer reputation findings of the QS Asian Rankings, in a way, point to the poor industry collaborations and placement of their graduates. 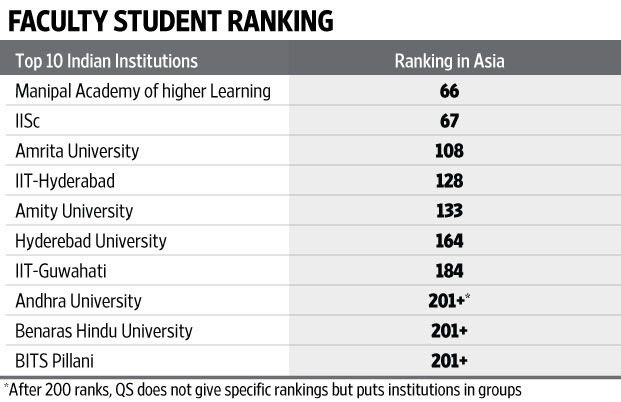 Click here for enlarge
4) Faculty staff with PhDs
This is the sweet spot for Indian universities. Indian professors are considered well-educated and reputed world over, and it reflects in the qualification of the teaching staff parameter considered for preparing the overall rankings. In the top 10 Asian universities in the ‘Faculty staff with PhDs’ parameter, seven are Indian institutions, of which five are jointly in the third position. In the top 30, there are 12 Indian institutions. 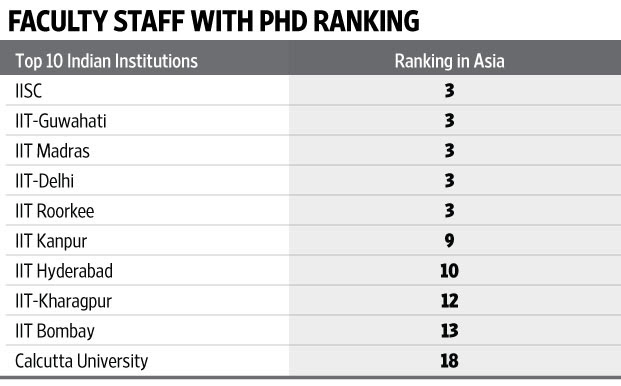 Click here for enlarge
5) Citation per faculty
Research quality of an institution and its faculty is established on the basis of the citations or the number of times others refer to it. This reinforces the importance and quality of research and its relevance in the global marketplace. Citation is one area that Indian teachers need to look at and it depends on the kind of journal a paper is being published in, quality of work, word of mouth publicity and the network of a professor or researcher. Click here for enlarge
6) In-bound exchange
Indian universities traditionally lag behind on internationalization parameters. International faculty, international students and exchange programmes have been poor. While traditional government institutions are yet to better the situation despite a clear demand from experts and industries, some of the private universities have started doing it. For example, Amrita University in Kerala promoted by spiritual guru Mata Amritanandamayi has done exceedingly well in all aspects of internationalization, much better than the elite IITs. Inbound exchange is the flow of foreign students to an institution for short durations of study, research or related academic activities.